Walking through the Openspace this evening, I heard a Reed Warbler singing along the stream which eventually gave views through the undergrowth. This species is not an annual migrant, but this is the first Spring bird I've had here.
Posted by Oli Mockridge at 13:51 No comments:

A quick trip to Ilse Brewer's after work this afternoon was well worth it, as the female RED-FOOTED FALCON gave fantastic views as it hunted along the river. Also of note, a Lesser Whitethroat singing next to the road. 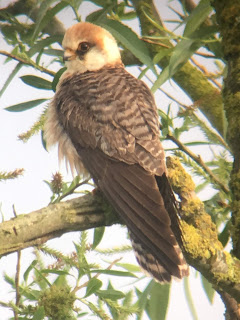 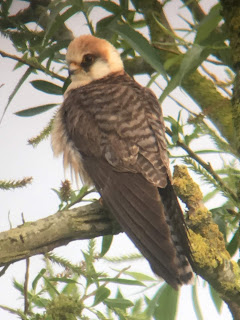 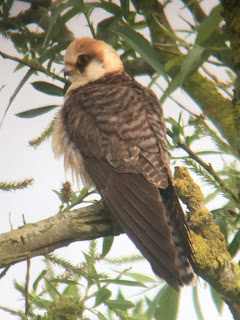 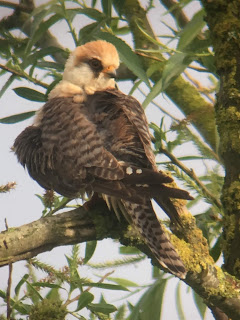 First stop this morning was Acres Down to try and catch up with the New Forest's honey buzzards. I failed to locate any last year and came away with pretty severe sunburn!

Thinking it was still a little early in the year, I was surprised to find both parking areas packed on arrival. I pulled up on grass verge (and remembered the suncream this time!) and headed out to the watch-point where several birders were already gathered. There were plenty of Buzzards about to check through, and before long the first Goshawk was picked out. This was followed by a pair of Hobbies, lots more Buzzards and at least 2 Crossbill flying about. Woodlark, tree pipit and nightjar were all heard and seen from the watchpoint, though I failed to connect. One birder then picked out a distant buzzard which seemed to be a promising candidate for honey. The heat haze certainly didn't help, and I only got onto the bird just as it dropped below the tree line - the wait continued. The morning was broken up by another Goshawk (at least 2 showed throughout the morning but it's likely more were present), the occasional flyover Crossbill and a male Cuckoo. I was somewhat surprised (and probably overreacted) to a flyover pair of Hawfinches, I hadn't even realised they bred in the south of the country. Eventually, one of the guys behind the main crowd said he had a good candidate heading in our direction. I was first onto the bird, it certainly wasn't a buzzard. As it got closer, we all got good views, and could see that it was indeed a Honey Buzzard. When I eventually looked up from my scope, I realised that it was virtually above us, and the bins allowed some great views of the bird's distinctive shape whist soaring. Great to finally catch up with one. 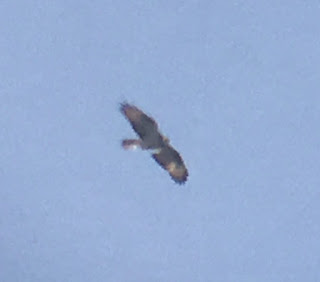 On the walk back to the car, I located a singing male Firecrest to round the morning off. I considered heading to Portland next for the rose-coloured starling, but there was no further news by the time I reached Dorchester so I headed home.

I checked the evening reports around 6:45pm, and saw there was a black-headed bunting on Portland! A bit of manic drive down ensued and I arrived in good time. I was able to park near the obs and walked/ran to Culverwell. On arrival, the birders on site told me they'd been on site for an hour and hadn't seen it. Things weren't looking good, but seconds later a large yellow-brown bird popped out. Raising my bins, I could see it was the 1st winter male BLACK-HEADED BUNTING! What a stunner! Can't remember the last time one of these was twitchable, so a great bird all round! 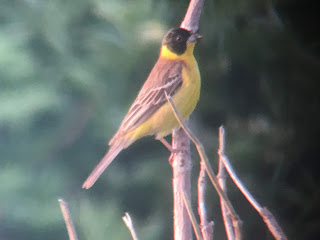 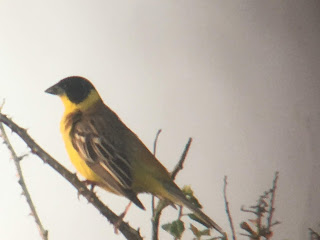 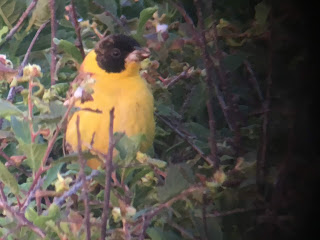 Whilst watching the bunting, someone picked out the Rose-Coloured Starling flying around. Once I'd had my fill of the bunting I went over and got some closer views. I saw a moulting adult back in late 2014, but close views of this fresh spring adult was a great end to the day! 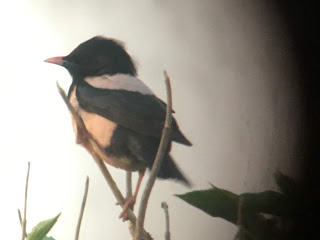 Posted by Oli Mockridge at 18:42 No comments:

Bit of a weird one today: common rosefinch is a long-overdue lifer for me, so when I saw a report that one of the Gibraltar Point birds was still present in the morning, I decided I should head up. I forgot that it was the first day of the bank holiday, and the journey ending up taking 7 hours, with 17 Red Kites and a Yellow Wagtail seen from the car window on the way up. On arrival, it was negative news - what had I been thinking!? A walk around the last location of the rosefinch produced a Hobby, a Willow Warbler and a few Med Gulls - less than I saw on the journey! 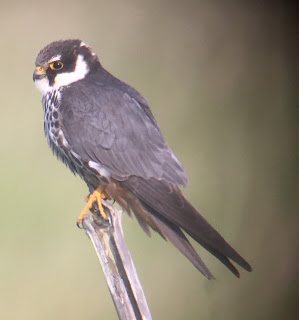 Posted by Oli Mockridge at 17:59 No comments:

The morning was cut short following news on a terek sandpiper at Rye Harbour, Sussex, a species I still needed. The drive over was uneventful and the TEREK SANDPIPER was showing on arrival. After most birders had left, I walked up to the far end of the path nearest to the bird, and some other twitchers advised me that great views could be obtained by stayed low and still in the grass. The fieldcraft certainly payed off! 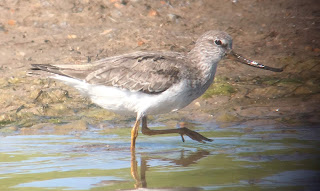 Also of note were singles of Curlew Sandpiper and Cuckoo. 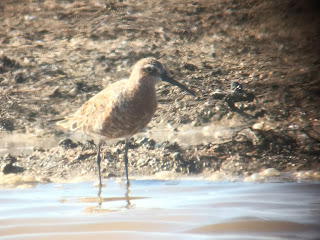 Posted by Oli Mockridge at 04:09 No comments:

Another look at Lyde Road produced virtually nothing except for 3 Reed Warblers, the 2 at the reedbed again plus a new male south of the compound - good to see there is still some migrants moving through.
Posted by Oli Mockridge at 03:59 No comments:

Had a Little Egret overhead today near Yeovil College. My second in Yeovil this year. The species has been more or less annual in Yeovil for the last couple years even though there was a space of several years where I failed to see any, so quite a good local record.
Posted by Oli Mockridge at 03:55 No comments:

Oli Mockridge
I’m a South Somerset based birder. I started birding in 2007 but only discovered twitching in 2013. Now I mostly twitch rarities but am a casual Yeovil Lister as well and concentrate on my local patch; Yeovil Openspace. I try to take record shots of all the decent species I see, and occasionally get decent photos too!